We carried out demolition, building & premises works at Canary Wharf in preparation for the New Retail Units being set up at the Station.

Our works commenced with the demolition of the male public toilets including removal of sinks, toilets, urinals, ceilings and internal walls. Once the services had been removed we completed the demolition of all walls in the footprint of the New Retail Units in preparation for the installation of the new steel work structure.

A section of the existing tiled flooring was then saw cut and broken out to the extent of the new footprint. Once the new steel structure had been installed we built new full height blockwork walls to divide the area into the separate retail units.

The existing baby change, female public & staff toilets were then modified to house the relocated ATMs and the male toilets. We removed five of the female toilet cubicles and built a new dividing wall to segregate the female & new male toilets.  Internal blockwork walls were then demolished where they conflicted with the new room layouts.

The existing sink units were reduced in length and the plumbing reconfigured.  New blockwork walls were then built at the end of the modified sink units in both the male and female toilets to suit the new layouts.  The urinals from the old male toilets were relocated to the new toilet and fixed in place.

All new walls and newly exposed walls were then tiled to match the existing and grouted to a finish.  Floor tiles within the footprint were also replaced where cubicles had been removed and walls demolished.

The Baby Change and part of the female toilets were converted into the new ATM Room.  To make this a secure and discrete room we demolished the existing walls and built new blockwork walls to the new layout.  New blockwork was also built on the front elevation to house the ATMs. The ATMs were emptied and the security door was relocated to the new area and hung on our new blockwork.  The floors in the room were screeded to give one level and the internal walls were decorated to a finish.

The new ATM Room was then fire stopped by our FIRAS operatives to provide 1 hour compartmentation. The ATMs were then relocated to the new ATM Room and the machines were brought back into use.

The Fire Riser adjacent to the new retail units was reconfigured to allow access and egress due to the change in layout.  New blockwork walls were built at the new boundary of the Riser Room and the existing entrance was relocated.  This room was also fire stopped by our FIRAS operatives to bring it back into use.

The floor area of the new retail units was then screeded to level out the floors prior to the shop fitting stage.

Finally works were undertaken to provide a new disabled toilet adjacent to the new retail units.  The original door was utilised and blockwork walls were built to full height.  We installed a new metal suspended ceiling in the new room to incorporate the lighting.  The new walls were then rendered and tiled to match the existing.  A new disabled toilet/ sink pack was then fitted in the room due to the change of use.  A self-levelling screed was then applied prior to the laying of the new Altro Tungsten flooring to complete this room. 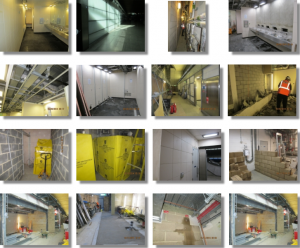