The Vehicle Blocker on the access road to the Service Control Centre at Highgate was to be replaced due to safety concerns.  D&D Rail were contracted to carry out the civils work associated with this activity.  Works commenced with the break out of the road surface and concrete slab surrounding the blocker.  As the access road is only single lane it was closed for the duration of the works.

Prior to the break out of the road we loaded out our plant and materials along with a tracked excavator and a tele-handler.  Solid Heras fence panels were then fixed in place parallel to the adjacent pavement to allow safe access to the Service Control Centre for pedestrians.  Marshals were also placed at either end of the barriers and work was stopped when pedestrians passed the site.  Scaffold netting was fixed to the adjacent fence to prevent construction dust from blowing onto the Sidings.

The road surface and concrete slab surrounding the blocker was broken out with the aid of the hydraulic hammer fixed to the tracked excavator.  Once the road was broken up it was removed by the excavator with the bucket now attached.  Rubble was loaded onto our vehicle for disposal by our licenced waste contractor.  The existing blocker was then lifted out of the excavation with the aid of the tele-handler and placed into the storage area.

We then constructed formwork with timber and plywood and poured a concrete base to accept the body of the new blocker.  Bagged C40 concrete was mixed on site and poured into the formwork which was vibrated to expel excess air and floated off.  Once this concrete had cured sufficiently we placed the new blocker in position with the aid of the tele-handler.  Following compaction of the formation with a vibrating plate a 50mm layer of C40 concrete was placed over the area of the excavation to form a blinding layer.  The existing hydraulic hoses were protected during this operation and placed into new flexible ducts.  Once the installation team had adjusted the blocker, connected the hydraulic hoses and the electrical supply our site team installed the rebar & mesh.  The rebar was fitted around and through the legs of the new blocker prior to the mass concrete infill.

Once the rebar and layers of reinforcement mesh had been tied in place and signed off by the LUL Engineers we arranged for the pouring of the mass concrete infill.  C40 concrete was delivered to site in a ready mix truck which was backed up to the excavation.  Ready mix concrete was then poured into the excavation around the new blocker to the required levels.  A 110v vibrating poker was used to expel excess air from the concrete during the pour.  The top of the concrete was then trowelled off and formed to the required levels.  Concrete cubes were taken from the delivery truck for compressive strength testing.

Following a suitable curing period we returned to site to cut back the existing asphalt with an angle grinder to assist with the profiling of the new road surface.  At this stage we also cut out the road surface for the installation of induction loops by others.  To ensure that the required falls were met we carried out a survey with a staff and level and marked the target heights along either side of the road.  A tack coat was applied to the new/ old concrete and a layer of 6mm DBM was laid and compacted to the previously set out target heights/falls.

Finally, after an agreed curing/ cooling period for the DBM we returned to clear our plant, materials and the old blocker from site.  The old blocker was loaded onto our vehicle with the aid of the tele-handler which was then collected from site along with the excavator.  Once all areas were cleared and swept we handed the road and storage areas back to TLL and opened the access road to vehicles. 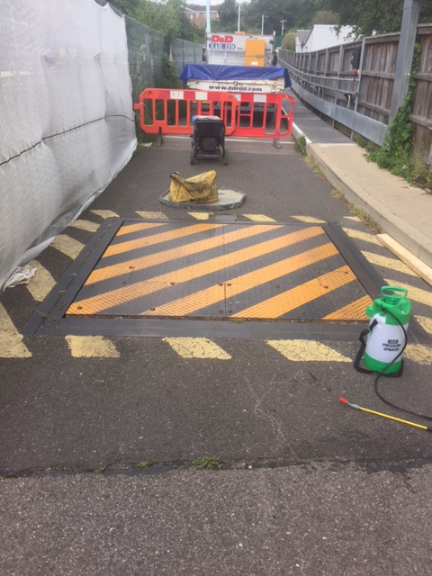 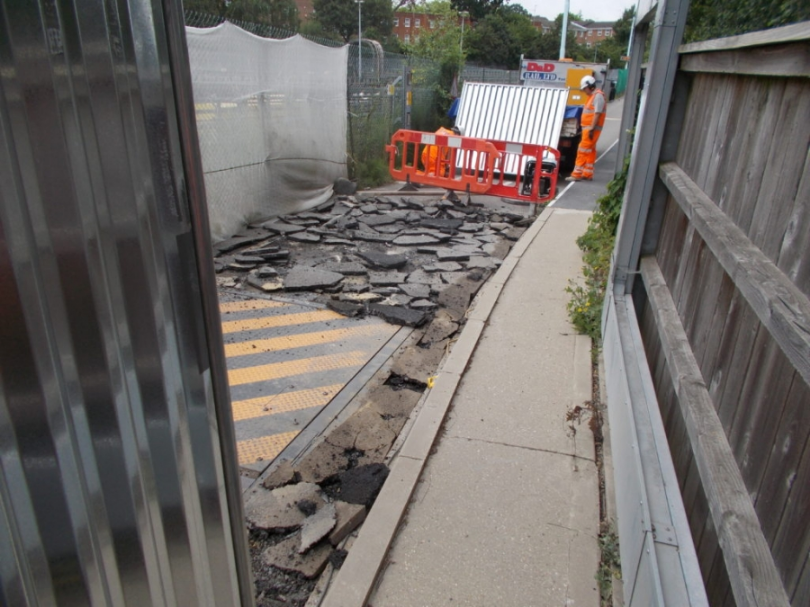 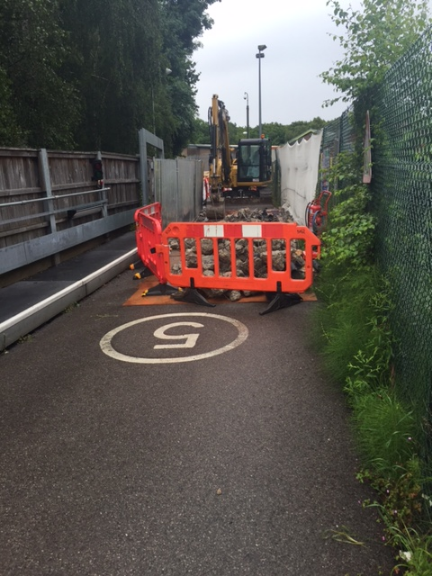 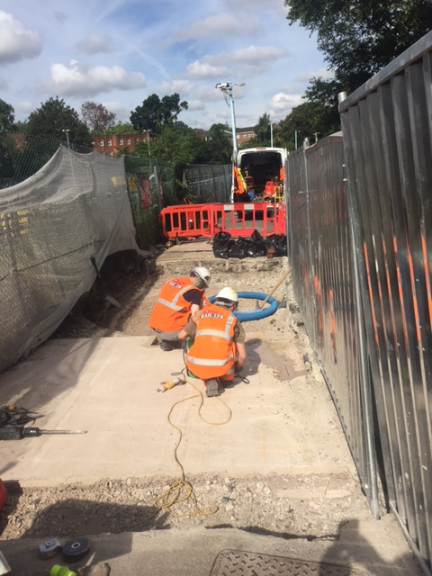 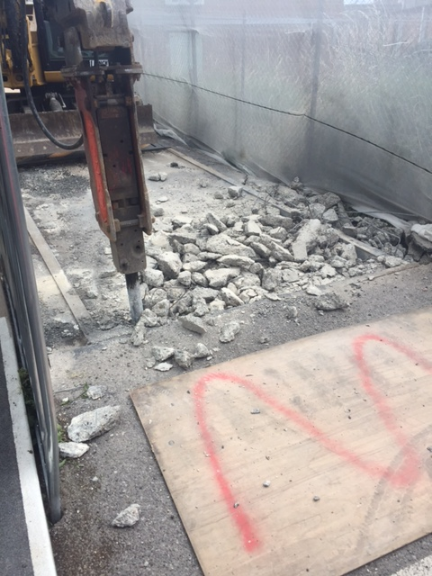 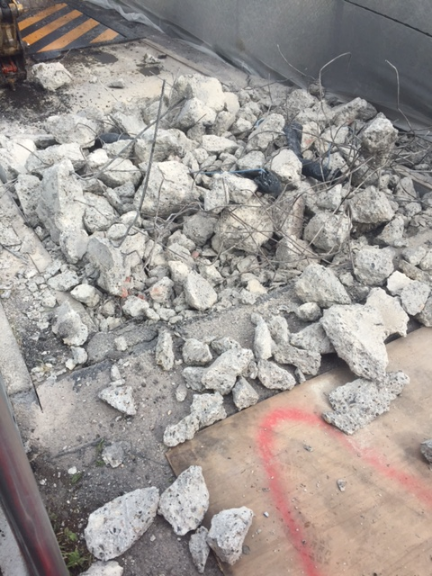 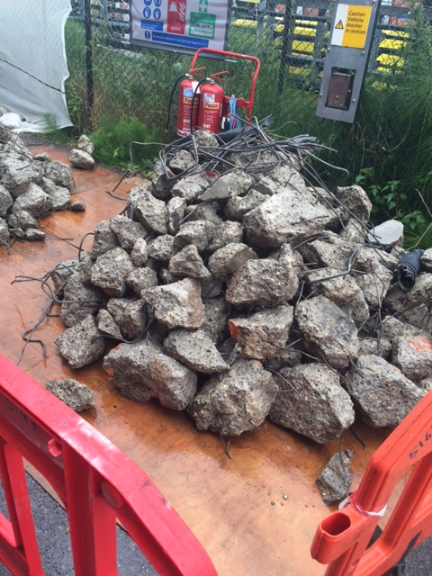 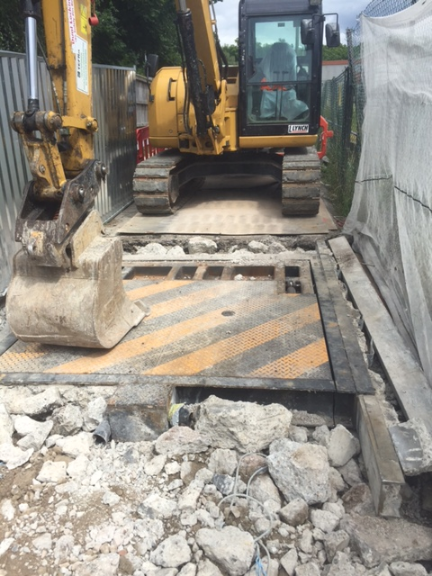 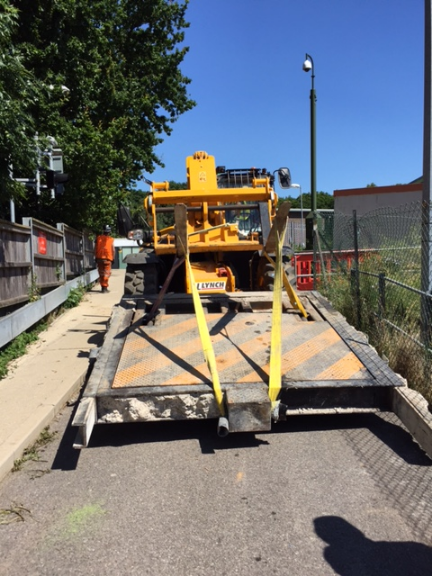 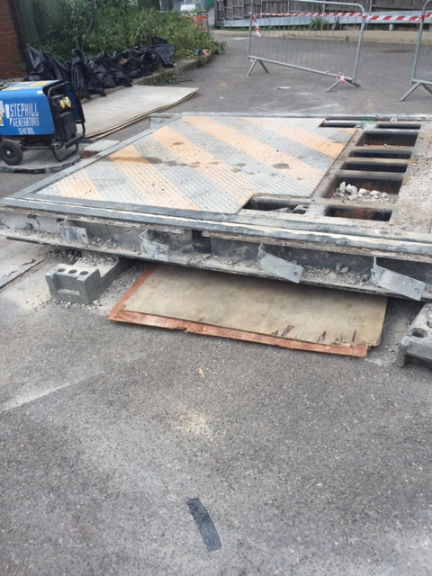 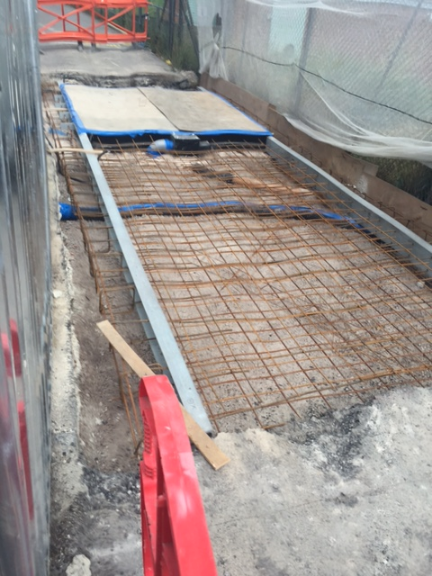 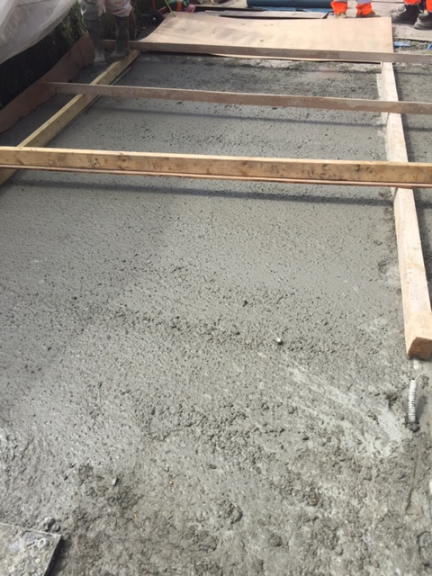 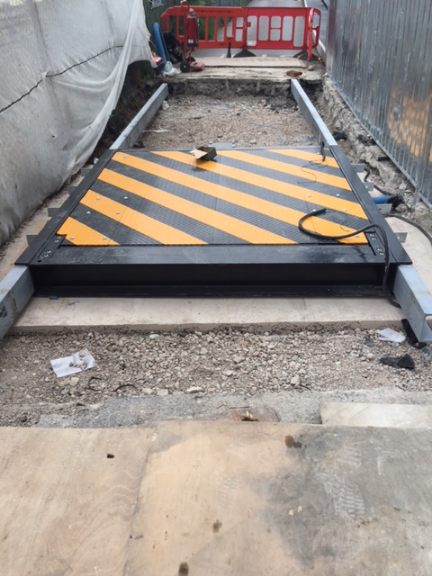 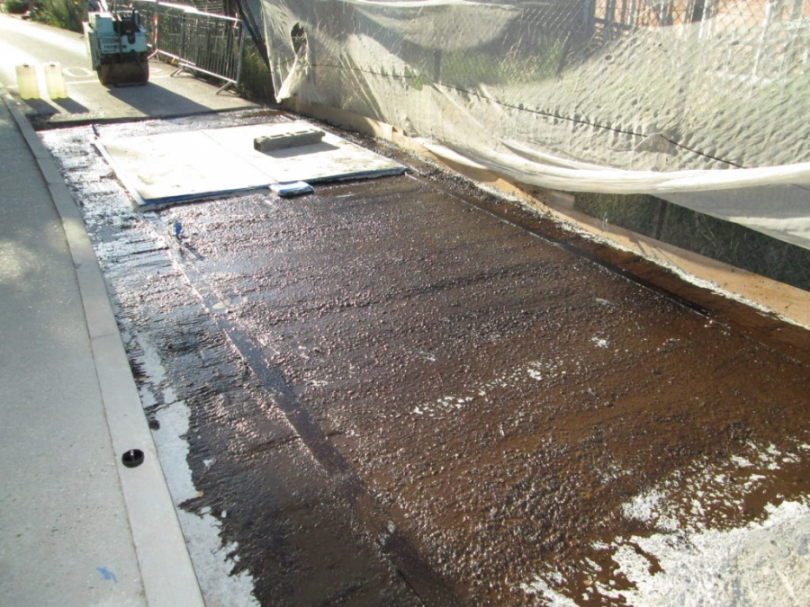 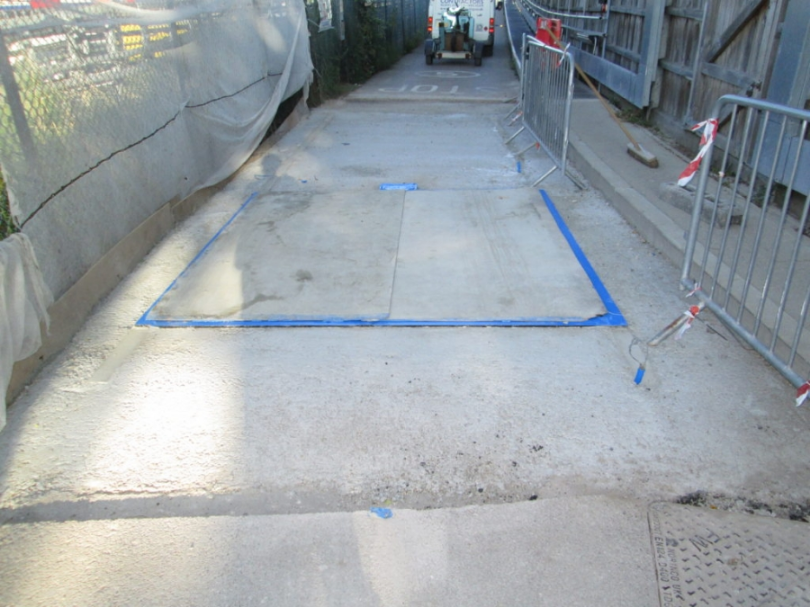 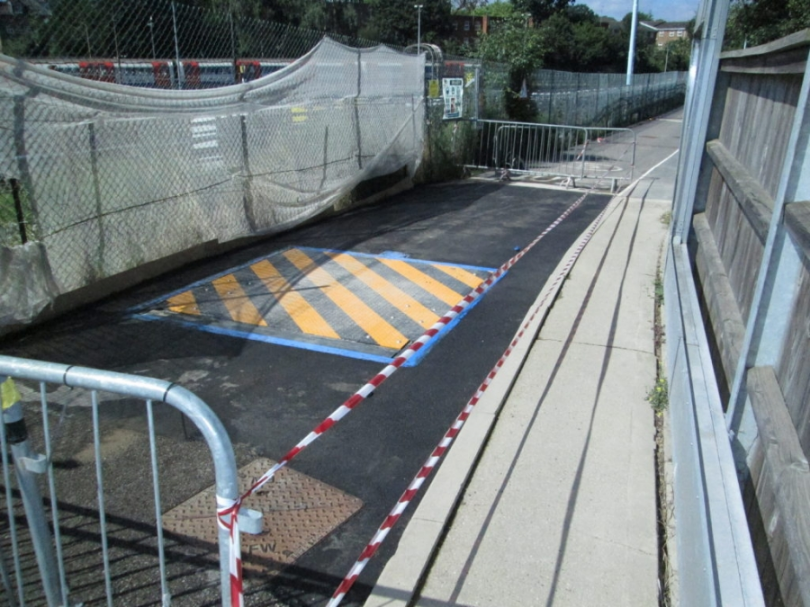 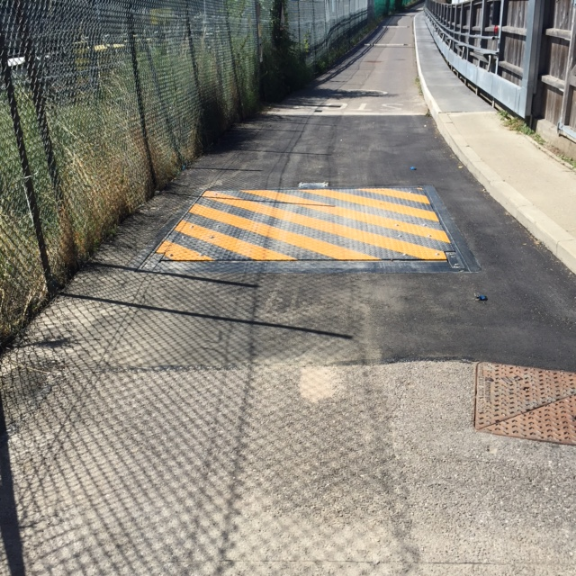