Kingsbury Station is listed as Amber on the LUL Noise Sensitivity Register.  A site trial was therefore carried out in conjunction with the Tfl Environmental Team.  During this trial the noise generated by the various items of plant was recorded with the noise barriers in place.  As a result of this trial Tfl applied for a Section 61 which was approved by Brent Council’s Environmental Officer prior to our start on site.

In order to comply with the Section 61 all noisy works were carried out within a sound proof enclosure comprising of heras panels with Soundex sheeting cable tied around all sides and above to form a roof.  Works commenced on a nightly basis with the loading out of the platforms with all plant and materials and the setting up of the sound enclosures.  Working from within the enclosure the existing tactiles were lifted and the current bed and joints were removed with the aid of lightweight 110v breakers and hand tools.  All beds and joints were broken out to a depth of 100mm below the FFL.

The existing tactiles were then re-laid on a 50mm 1:4 sharp sand and sulphate resistant cement bed.  Any tactiles which were badly damaged during the removal process were replaced with new to match the existing.  Expansion joints were formed at the front and rear of the re-bedded tactiles by installing Flexcell board from the formation level to 20mm below the FFL.  Polycote Jointex XFH was then poured to form expansion joints 25mm wide at the nosing side and 12.5mm wide adjacent to the platform paving.  Any remaining gaps between the expansion joint and the nosings were infilled with Parex FS Mortar to complete the construction joint.

At the South End of Platform 2 the stick-on tactiles over the cable duct were removed.  New concrete tactiles were cut to size to abut replacement stick on tiles.  We then removed all old adhesive from the cable duct and repaired the surface with a bed of rapid cement and sharp sand. New stick-on tactiles were laid on the repaired duct with new adhesive at a level with the re-laid concrete tactiles and surrounding platform.

A nosing stone on the platform ramp at the North End of Platform 2 was found to be misaligned.  The joints between adjacent nosings were removed with the aid of an angle grinder and the nosing was separated from the existing bed by mechanical means.  The existing bed was broken out with the aid of a lightweight breaker down to formation level.  A new 1:4 sharp sand and sulphate resistant cement bed was placed and the nosing lowered into position and tamped to the correct position and level.  The joints between adjacent nosings were filled with Parex FS Mortar.  Once complete the re-bedded nosing was checked for gauging by a T002 and a track clearance certificate issued.

During the course of these works we ensured that the platform was free from tripping hazards, all tactiles were secure and level and that all products used were fully cured prior to handover to passenger service. 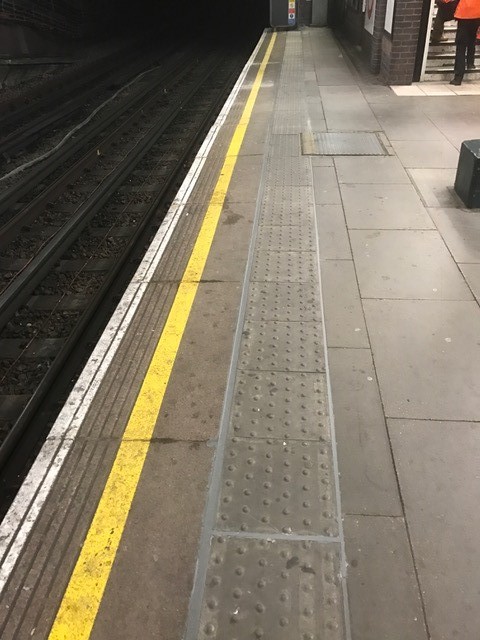 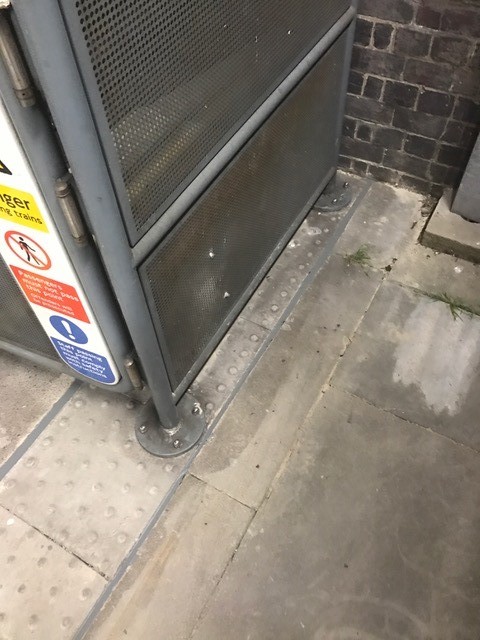 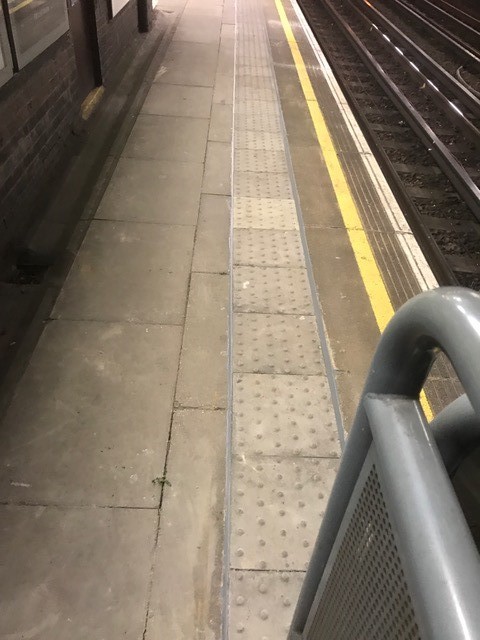 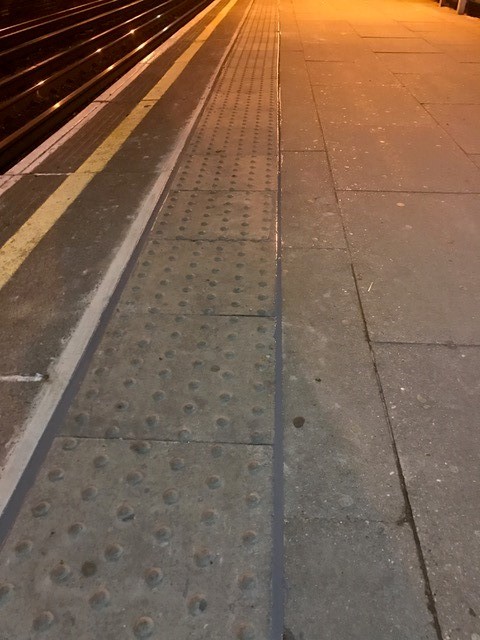 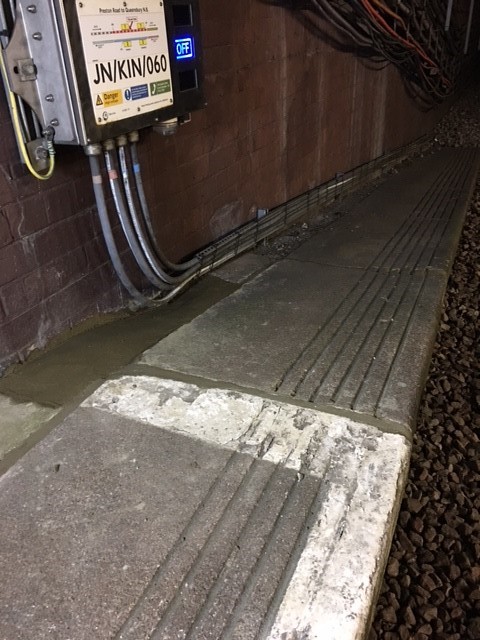 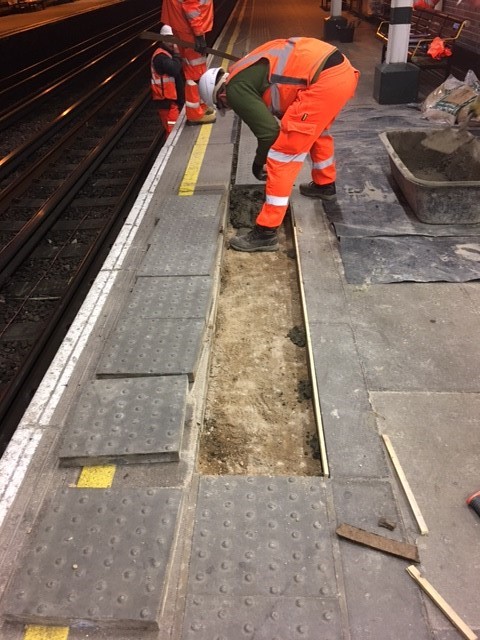 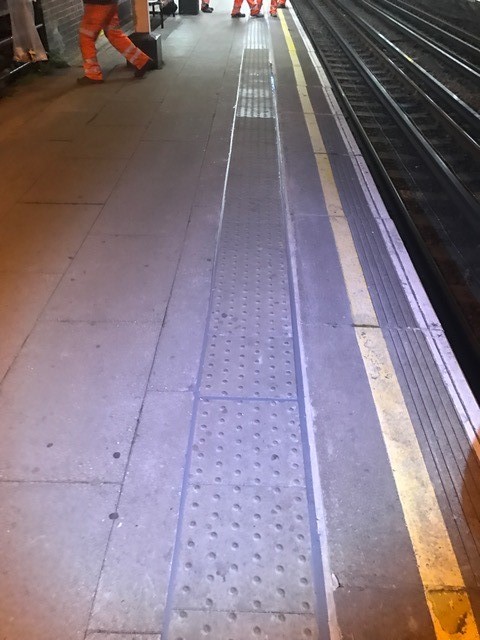 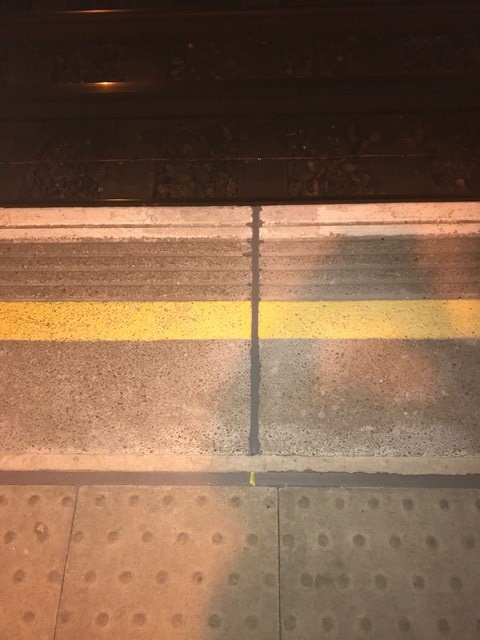 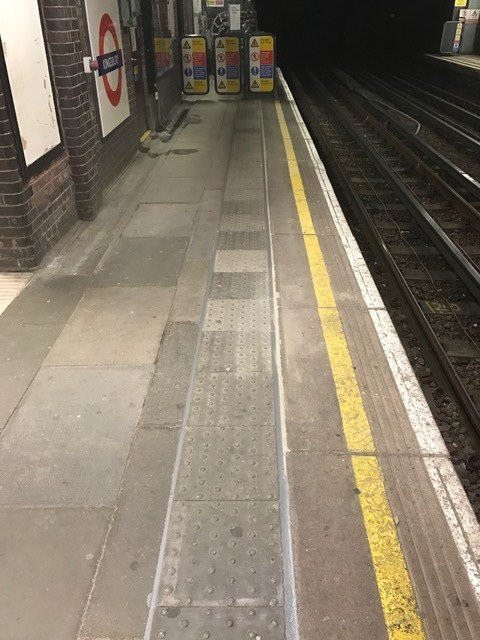 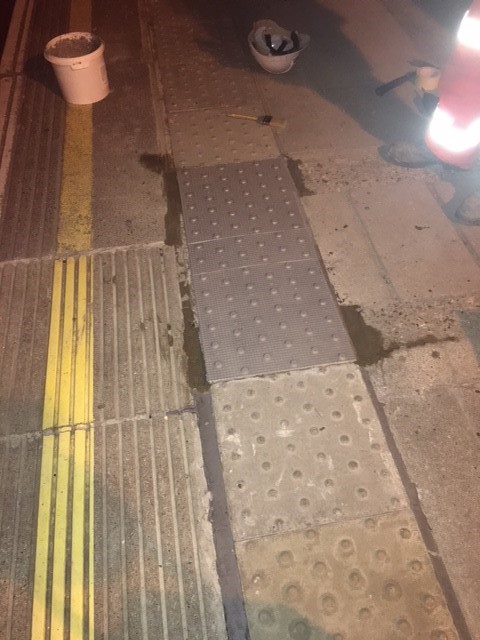